Weapons were seized and a man arrested on suspicion of armed robbery on the first night of a week of action to tackle knife crime.

Officers from the Force Proactive Team were out on Sunday evening across Teesside for the beginning of Operation Sceptre, which is a national campaign that takes place twice a year to ensure people are safe from knife crime in their community and to raise awareness of the risks and consequences of carrying a knife.

In Stockton, officers searched a man who appeared suspicious on Hartington Road, who was found to be carrying a knife and a small amount of cannabis, and was arrested for possession of a bladed article and possession of a controlled drug.

In Middlesbrough, officers stopped and searched another man, who was found to be carrying a large among of cash and substances believes to be heroin, and crack cocaine. He was arrested on suspicion of possession with intent to supply a controlled drug.

Sergeant Darren Williamson from the Force Proactive Team said: “The Force Proactive Team was formed as part of Chief Constable Mark Webster’s commitment to reduce serious violent crime, tackle knife crime, and the distribution of controlled drugs within our communities. Over the last nine days the team has made 29 arrests for various violent offences, warrants, and prison recalls. 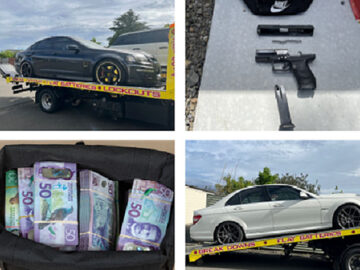