With the help of an anti-drug organization, the Russian government will track cryptocurrency transactions.

Russian institutions have responded to a public movement’s request for collaborative efforts to track down bitcoin transfers linked to the drug trade.
Stopnarkotik, a drug-abusing group, has requested that the interior ministry and the central bank look into suspected ties between Suex, a US-sanctioned crypto exchange, and a darknet market operating in the region.

The Russian Federation’s Ministry of Internal Affairs (MVD) and the Bank of Russia have decided to work together with the All-Russian Public Movement Stopnarkotik to track down financial movements using cryptocurrency earned via drug sales.
The deal was reported on by the Russian online news outlet Lenta.ru, which cited a letter from a high-ranking MVD officer.

After a working discussion with leaders of the anti-drug group, Major General Andrei Yanishevsky, director of the Interior Ministry’s Drug Control Department, issued the letter.
It comes in response to Stopnarkotik’s request that the two organizations conduct an inquiry into Suex, a Russian OTC crypto broker, and its ties to other businesses and financial institutions.

The Czech-registered firm Suex OTC s.r.o., which operates out of physical offices in Moscow and Saint Petersburg, was blacklisted by the US Treasury Department in September.
Scams, ransomware attacks, darknet marketplaces, and the infamous Russian BTC-e exchange are all thought to have used the crypto platform to handle hundreds of millions of dollars in currency transactions.

Suex is thought to have collected around $481 million in BTC since its inception in 2018.
According to blockchain forensics firm Chainalysis described in a report, ransomware operators like Ryuk, Conti, and Maze sent around $13 million, crypto frauds like Finiko sent over $24 million, mixers sent $20 million, and darknet markets like the Russia-targeting Hydra contributed another $20 million.

Suex had been “engaged in money laundering for the largest drug-selling platform,” according to Stopnarkotik’s plea to Russian authorities following the announcement of the US penalties.
The Russian Federation’s drug trafficking business is believed to be worth $1.5 billion or more each year, according to the organization.

It also mentioned the name of one of Suex’s co-founders, as well as the company’s alleged ties to other crypto companies and financial institutions, including Exmo, a major digital asset exchange in Eastern Europe, Qiwi, a leading payment provider in Russia and the CIS, and Concord Bank, based in Ukraine.

Stopnarkotik has requested that the Bank of Russia analyze the situation, investigate if Suex and other businesses are operating in compliance with Russian legislation, and consider restricting Russian transfers to a Ukrainian entity.

“The Ministry of Internal Affairs and the Central Bank both responded to our request.
The movement’s head, Sergei Polozov, was cited as stating, “We also had a personal discussion with the Ministry of Internal Affairs so that they understood how we collect information, especially concerning money laundering.”
He went on to say that the Russian Interior Ministry is willing to take Stopnarkotik’s data and collaborate with them. 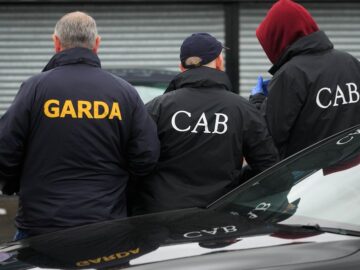