The chief public prosecutor in Breda has offered a reward of 15,000 euros for the golden tip in the investigation into the death of Roshentlie Rosaria from Barendrecht. Rosaria, 23, was found dead in Vlissingen on Friday morning, September 17, 2021. He had multiple gunshot wounds, police said in Opsporing Verzocht.

His body was in a firebreak behind the houses on the Adriaen van de Vennestraat. The victim grew up in Vlissingen and went there often. On Thursday evening, September 16, he visited a grill room on Bloemenlaan with his brother and a friend. The three got there around midnight and hung out in the area for a while until they left around 12:40 am.

They said goodbye and Rosaria rode his electric bicycle through Vlissingen. He visited an acquaintance around 01.30. That woman says that Rosaria went out a number of times and came back again. At about 03.30 he left there for good.

A few minutes later he must have arrived at the Adriaen van de Vennestraat. It is still unclear who he may have met there and what happened next, but bangs were heard around 03.50 am. Those were probably the shots that killed Roshentlie.

As far as the police have been able to find out, no acquaintances of the victim lived in Adriaen van de Vennestraat. Why he was on that street is still under investigation. Roshentlie may have been lured there, or he may have been followed while en route to another location.

The victim left his girlfriend and their daughter behind. 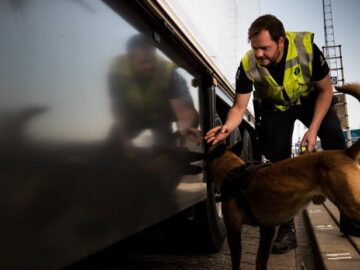