Approaching the Christmas and New Year’s Day holidays, the Customs has launched a series of enforcement actions against party drugs since November. A total of 11 cases of party drug trafficking have been cracked, and approximately 52,000 suspected ecstasy pills and approximately 153 kilograms of pregnant women have been seized.

Near the Christmas and New Year’s holidays, the Customs has launched a series of enforcement actions against party drugs since November. A total of 11 cases of party drug trafficking have been cracked, and about 52,000 suspected ecstasy pills and about 153 kg of suspected cannabis were seized. The estimated market value is as high as 3,600. Ten thousand Hong Kong dollars, three men were arrested in the operation.

The customs estimated that as the Christmas holiday was approaching, drug cartels took the opportunity to sell drugs in large quantities. Therefore, the customs adjusted its strategy and launched a series of anti-drug operations to successfully prevent a large number of party drugs from entering the market.

According to Chen Shaoqiu, commander of the first group of drug investigations of the Customs Narcotics Bureau, officers from the Port and Maritime Bureau of Customs inspected a 20-foot container arriving from Canada at the Tsing Yi Customs Inspection Yard on December 6. The container was reported to be carrying instant oats. However, through X-ray inspection, the personnel found that the density of the container’s image was suspicious. They opened and inspected each box of instant oatmeal. In the end, it was found that 108 boxes of 1160 boxes of instant oatmeal contained 1 kg of hemp flowers, a total of 108 kg, with a market value. Up to 23 million yuan.

Since Canada is one of the high-risk areas for exporting cannabis, the customs believes that criminals disguised drugs as food in an attempt to confuse drugs. It is estimated that drug dealers are hoarding large amounts of cannabis to supply the local market.

The Customs Drug Investigation Bureau then took over the investigation and locked a drug storage center in Tuen Mun. First, a 25-year-old man was arrested in an industrial building in Tsuen Wan. He originally received the 108 kilograms of cannabis flowers; the officers then locked another warehouse in Tuen Mun. He also seized 45 kilograms of cannabis, with a market value of 10 million Hong Kong dollars, in the warehouse, and arrested a 43-year-old man who reportedly was an employee in the logistics industry.

Customs officers found drug packaging tools in both warehouses. It is believed that the two places are drug storage and packaging centers.

According to Liu Youlun, the commander of the third group of drug investigations of the Customs Drug Investigation Division, the customs has cracked 10 cases of using parcels to traffic ecstasy since November, one of which was when customs officers inspected a mail from France in Mong Kok on December 6. A 49-year-old man was arrested in Mong Kok for collecting the mail involved in the case with 250 grams of his head fan concealed. He is currently being detained and detained for enquiries.

Liu Youlun said that the 10 cases mentioned above are still under investigation, and other arrests are not ruled out.

Liu explained that most parcels with ecstasy seized in the past came from different European countries, such as the Netherlands, Belgium, Germany, France, and Spain. The collection methods were mostly covered by coffee, candy packaging, toys, bed sheets, and cans, in order to avoid customs. Personnel traced.

Liu Xu said that the customs found that most of the receiving addresses of these packages were incomplete or non-existent, and after the packages arrived in Hong Kong, criminals would contact the delivery company to change the delivery address and use false authorization documents. The goal was to avoid disclosing themselves. Identity and address.

The customs reminds logistics companies to pay attention to the above-mentioned drug trafficking tactics. If suspicious mail is found, they can provide information to the customs.

Li Jiaming, the supervisor of the Customs Drug Investigation Division, concluded that as of December 9 this year, the customs had seized 196,000 ecstasy pills throughout the year, which was similar to the same period last year. The related drugs were mainly from European air parcels. The customs also seized 690 kilograms of marijuana, compared with last year. Over the same period doubled.

Li Jiaming pointed out that there are two peak periods for seizures of ecstasy and marijuana in 2021, namely during the summer vacation from June to August, and on the eve of the Christmas holiday from November to early December.

The customs estimated that near the eve of the long Christmas holiday, drug cartels took the opportunity to traffic in large quantities of so-called party drugs to supply the market. Therefore, the customs adjusted its strategy and launched a series of anti-drug operations to successfully prevent a large amount of party drugs from entering the market. 0 134
Why Aren’t Thousands of Gigabytes of Abusive Images Removed from the Web? 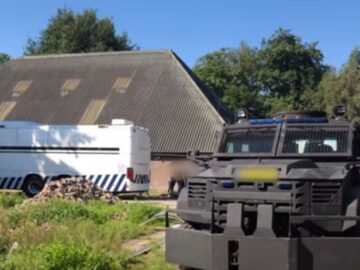