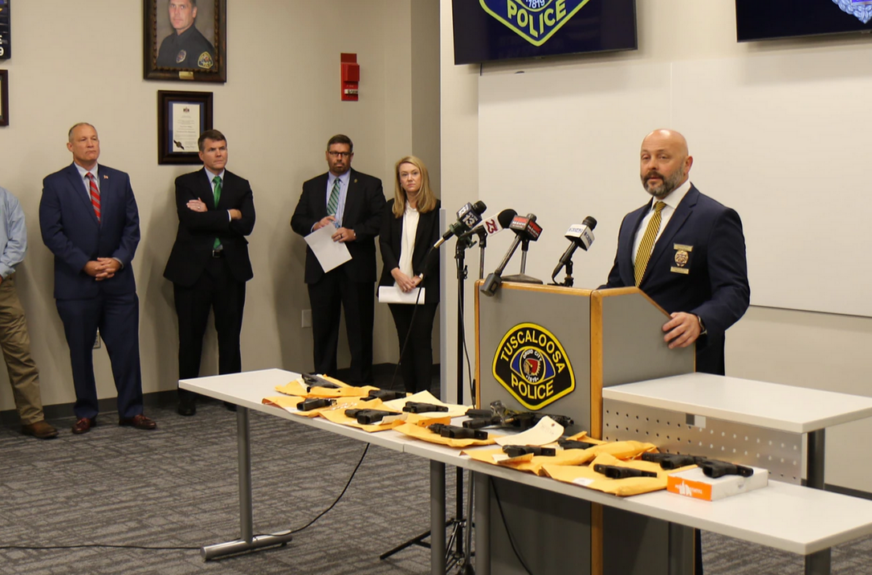 A 2 1/2-month investigation aimed at curbing violent crime in Tuscaloosa focused on illegal purchases of guns and led to state felony charges for nine people.

Additionally, 13 people were charged on federal offenses, and more than 100 guns were taken off the streets as part of the probe.

“Many of these weapons are being trafficked into other states and being used in crimes,” said Tuscaloosa Assistant Police Chief Steve Rice. “Straw purchases are one of the main ways firearms enter the illegal market.”https://a3db2834d1ae2e788854a8fd27477419.safeframe.googlesyndication.com/safeframe/1-0-38/html/container.html

Straw purchases are illegal under both federal and state law, with the prohibited person and the straw party subject to criminal prosecution.

As of Monday, four of the nine people charged with state crimes were in custody. Authorities obtained a combined 20 warrants on those nine people.

“We have convicted felons who are convincing or paying third parties to break the law for them,” Rice said. “The guns aren’t ending up with people who keep them in a nightstand for protection, or who take them out to the range to shoot on a Saturday. They’re ending up in the hands of people who are committing crimes, and this puts the community at risk.”

Investigators learned that the weapons were later transferred to people who are prohibited from owning or possessing firearms.

When making a straw purchase, buyers sign an ATF Form 4473 that certifies they will be the owner of the firearm. Lying on the form is a felony punishable by up to 10 years in prison and fines up to $250,000.

He lauded investigators focusing on those helping to put guns in the hands of people who can’t have them.

“We won’t know the number of lives that have been saved because of this 2 ½ months’ work,’’ Maddox said, “but no doubt countless lives have been saved.”

Rice said investigators looked at more than 113 cases. “Many of these guns purchased ended up in the hands of criminals and they cannot legally own or possess a firearm and ultimately are used in violent crimes in community,’’ he said.

Ashley Lightner, ATF’s assistant special agent in charge in Alabama, said many of the firearms were recovered in Tuscaloosa and in Alabama but many others were trafficked other states with more stringent gun laws, including Pennsylvania, New York, New Jersey, Massachusetts and Washington D.C.

“The guns trafficked up to D.C. ended up in their worst district,’’ Lightner said.

“All too often, guns are found at crime scenes and those come from hundreds or even thousands of miles away,’’ she said. “We are committed to work…to disrupt the entire firearm trafficking network, from where those guns originate to where they end up and all the towns and cities along the way.”

“Prosecuting individuals who are among the most significant drivers of violent crime in our community – those who are responsible for activities that consistently fuel violence, such as firearms trafficking and straw purchasers – is a top priority of my office,’’ Escalona said.

Tuscaloosa County District Attorney Hays Webb said he is pleased with the team effort shown during the investigation.

“Daily we are working with them to figure out ways we can decrease violent crime in our community to make it as safe as possibly can,” he said. “This is a novel approach with these straw purchases, to prosecute straw purchases in state court.”

“This is attacking the crime before it happens almost. It’s at a different level from what you normally see. It’s not after the fact, after we’ve got another home or car or body shot up,’’ Webb said. “We’re going after the people who are illegally purchasing guns – we don’t care if it’s an illegal purchase, an illegal sale, illegal possession or the illegal use of guns, we’re going to do everything we possibly can to attack it at every level and to make our community as safe as it can possibly be.”

0 67
VPN trackers: Everything you need to know