An Arizona man was stabbed to death following a dispute with his son over paying for groceries. The incident took place during the early morning of Friday, April 1.

Mesa police responded to a call from a concerned witness who reported that the victim had yet to return home after going to meet his son on Thursday afternoon to take him grocery shopping, according to court documents obtained by AZ family. The documents also stated that the suspect, identified as Jason Todd Jeschor, 43, suffered from schizophrenia and had not taken his medication.

When authorities arrived on the scene, police said they discovered Jeschor with a knife on his waistband, which was quickly confiscated. According to court documents, the suspect informed officials that his dad was not doing well, before admitting that he killed him.

Jeschor told police that while he and his dad were at the store, his card was declined and his dad refused to pay for the groceries for him, according to the department.

Jason then admitted, according to court documents, that when the two returned to the apartment, he stabbed his father with homemade “spear-like object,” in addition to stabbing him in the neck with a switchblade knife – the one taken from him when police arrived. Jeschor later cleaned the victim’s blood from the floor and moved his body.

According to court documents, Jeschor believes that the murder was justified and he did not feel any remorse.

He now faces one count of second-degree murder and another count for tampering with evidence. His bail is set at $1 million. 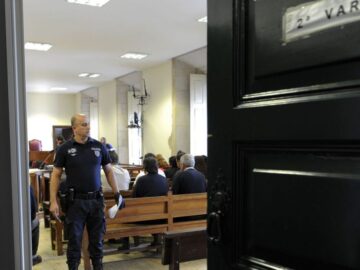